Turn the tassel: Prison inmates are closing in on Calvin College degrees

The "Calvin College Initiative" awarded its first cohort of 17 students with certificates of completion Friday at a Convocation ceremony held inside the Handlon Correctional Facility in Ionia. 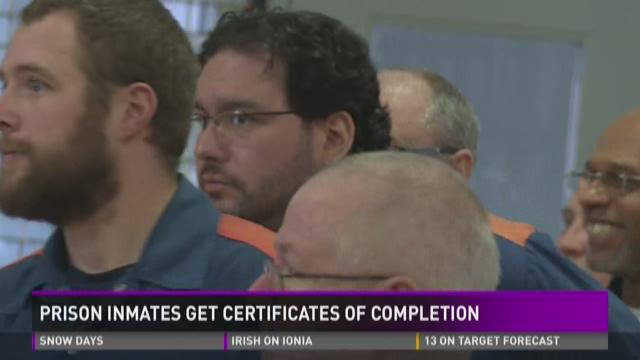 The "Calvin College Initiative" awarded its first cohort of 17 students with certificates of completion Friday at a Convocation ceremony held inside the Handlon Correctional Facility in Ionia.

The students who received their certificates are a year and a half into their Calvin education. The inmates are continuing on track to complete their bachelor's degree in a total of five years.

"When we first envisioned this program, we wondered if it could ever happen, and when we have gatherings like this, when we mark achievements of these students, and their growth as human beings, it's something you can't quite put into proper words," said John Rottman, Calvin College Seminary professor. "I taught the first class that we offered four years ago before the actual credited program got off the ground, so I've known some of these inmates for a long time."

The convocation ceremony started at 9 o'clock in the morning. The 17 students filed into the prison gymnasium. After several faculty members spoke, the inmates were called up one by one and handed a certificate of completion, letting them know they have achieved the half-way point of their pursuit toward their college degree.

"The Michigan Department of Corrections is very focused these days on offender success and that starts at the beginning of their incarceration and carries through until they go home," said Ken McKee, MDOC Deputy Director. "These individuals are completing these college programs in a very difficult environment."

McKee added that this program is preparing many of these inmates for life on the outside.

"95% of these inmates who are incarcerated are going home one day, so it's imperative that we give them the tools, and we plant seeds in their heads, so that they become better people," said McKee. "This is about public safety, so if these inmates can get out there and can find a job and do the right things in life, they're not on a cycle of incarceration and coming back to us."

Valmarcus Jones, from Grand Rapids, is in prison for first degree murder, and is one of the Calvin Prison Initiative students at Handlon.

"This is probably one of the biggest opportunities I've had in my entire life," Jones said. "I truly believe this is God's way of coming inside the prison and letting us know, 'I haven't forgotten about you.'

"When you grab a hold of something, and it's something fulfilling, it takes you to a whole new world; it's not even like you're in prison anymore."

The Calvin College Prison Initiative gives 20 inmates each year the opportunity to begin pursuing a bachelor of arts degree in ministry leadership. The students take classes in theology as well as Calvin' liberal arts core courses. Inmates from any of the 31 prisons in the Michigan Department of Corrections system can apply to the program, and each August admitted students are transferred to the handlon Facility.

Since the program was accredited in 2016, a second cohort of 20 students has begun their studies at Handlon, growing the total number of students to 37.

The students who received their certificate of completions Friday are expected to graduate with their degree in 2020.

According to Todd Cioffi, co-director of the Calvin Prison Initiative, the program is currently run exclusively through private donations. The prisoners are not required to pay tuition, and there is no government funding.