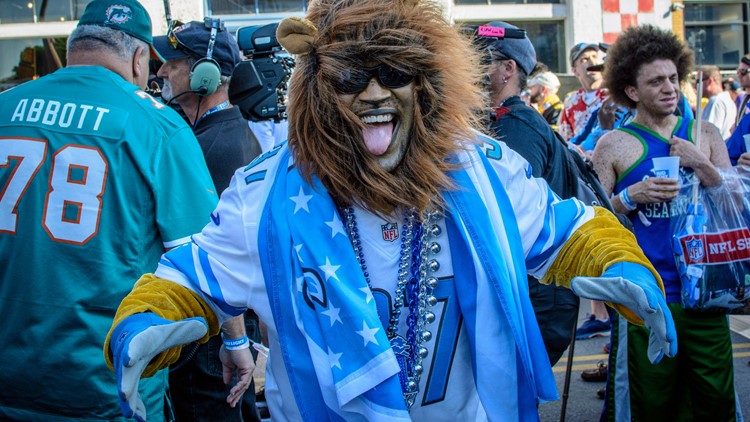 Photo by: AP
Detroit Lions fan Aaron Latimer from Saginaw, Michigan supports his team during the NFL Draft, Friday, April 26, 2019 in Nashville, Tenn. While it isn't unusual for fans who cheer for the same teams to bond at the NFL Draft, several super fans in Nashville for Friday's second and third rounds have enjoyed getting to know fans of teams they will be rooting against when the season kicks off in the fall. (AP Photo/Jim Diamond)

Lions take Hawaii's Jahlani Tavai in 2nd round of draft

Tavai is second on Hawaii's career list in tackles and was on preseason watch lists last year for the Bronko Nagurski and Butkus awards. He averaged 10.2 tackles a game, but a shoulder injury cut his 2018 season short, and he played in only eight games.

"Shoulder's doing great," Tavai said on a teleconference Friday night. "I'm just getting excited to be able to get into pads again."

In 2017, he started all 12 games at middle linebacker and ranked 10th nationally in tackles.

Detroit took Tavai with the 43rd pick — the highest a Hawaii player has been drafted since Tennessee took defensive end Travis LaBoy at No. 42 in 2004.

An NFL.com analyst projected Tavai to go in the fourth or fifth round , and Detroit's pick in the first half of the second round was a bit of a surprise. The Lions took tight end T.J. Hockenson in the first round Thursday night.

"Prior to the draft, what my agent was telling me, it was either day two or day three," Tavai said. "So really I wasn't really sure. I was just waiting for a phone call within those rounds."

In addition to being a football standout, Tavai has also been an impressive rugby player and was named to an Under-18 U.S. national team.

"Big thing with rugby, especially in sevens, is learning how to make a better tackle in the open field," Tavai said. "So that was one thing that really helped me in football."

The last time the Lions took a linebacker in the draft was 2017, when they selected Jarrad Davis in the first round and Jalen Reeves-Maybin in the fourth.