The president says the military is 'thrilled' to participate in the event. Critics say Trump is using it to promote himself. 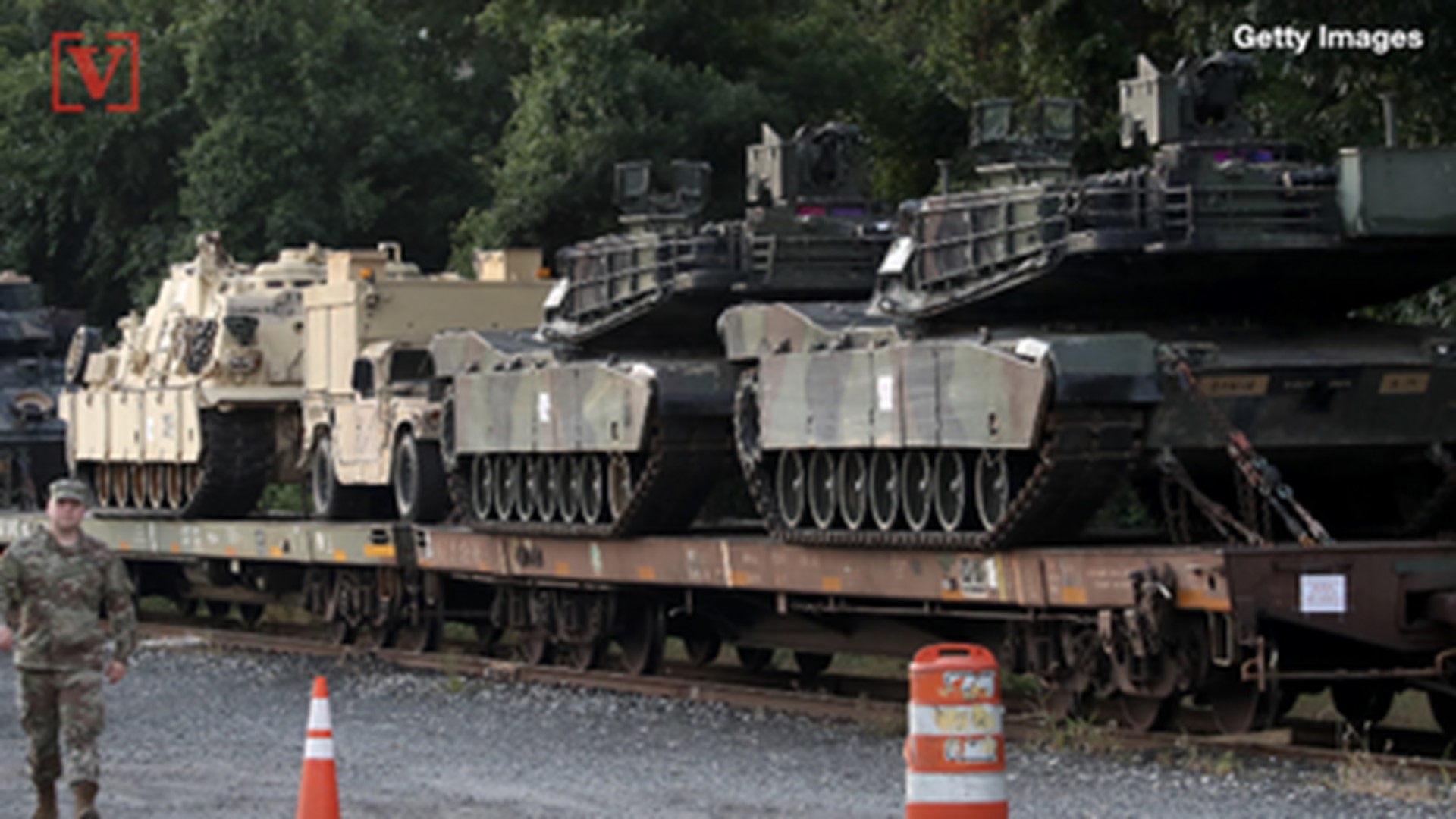 WASHINGTON — President Donald Trump marshaled tanks, bombers and other machinery of war on Tuesday for a Fourth of July celebration that traditionally is light on military might, while critics accused him of using America's military as a political prop.

Under White House direction, the Pentagon was scrambling to arrange for an Air Force B-2 stealth bomber and other warplanes to conduct flyovers of the celebration on the National Mall. There will be Navy F-35 and F-18 fighter jets, the Navy Blue Angels aerial acrobatics team, Army and Coast Guard helicopters and Marine V-22 Ospreys.

A small number of 60-ton Army Abrams battle tanks were sent to Washington by rail to be positioned on or near the National Mall, though the District of Columbia government fired back with its own verbal salvo.

"Tanks, but no tanks," it tweeted, adding that the Pentagon itself said last year that a tank's steel tracks could damage city roadways. Also scheduled to make appearances over the Mall are the presidential Air Force One and Marine One aircraft.

Trump, casting the extravaganza as a "Salute to America," tweeted on Tuesday that military leaders are "thrilled" to participate. If so, they were hiding it well. Pentagon officials referred questions to the White House. Military officials would not even say on the record whether Gen. Joseph Dunford, chairman of the Joint Chiefs of Staff, plans to attend.

"Military Leaders are thrilled to be doing this & showing to the American people, among other things, the strongest and most advanced Military anywhere in the World," Trump tweeted. "Incredible Flyovers & biggest ever Fireworks!"

"This is raw politicization," countered Loren Dejonge Schulman, a senior fellow at the Center for a New American Security and a Pentagon and White House official during the Obama administration. She said in an email exchange that Trump's use of the military appears to be less about honoring the men and women serving in uniform than about trying to "brag to and humor" his political cronies.

Rep. Betty McCollum complained, "Mr. Trump is hijacking the celebration and twisting it into a taxpayer-funded, partisan political rally that's more about promoting a Trumpian cult of personality than the spirit of American independence and freedom. The Minnesota Democrat, who chairs the Interior Appropriations subcommittee, said the Interior Department and the Pentagon have not answered multiple requests for details on how much the event will cost.

White House officials sought to counter the criticism by stressing that the president would deliver a patriotic speech at the Lincoln Memorial during an event that he has billed as honoring the U.S. armed forces.

The administration undercut its own assertion of it being a nonpolitical event, however, when senior presidential adviser Kellyanne Conway said the speech will highlight "the success of this administration in opening up so many jobs for individuals, what we've done for veterans," in addition to celebrating democracy, patriotism and the military.

A fundamental feature of the military's role in American democracy is its insulation from politics, which is meant to ensure the armed forces' loyalty to the Constitution rather than to an individual elected leader. That is why, for example, members of the military are not allowed to participate in political campaigns, and why Trump's first defense secretary, Jim Mattis, slow-rolled a White House plan for a Veterans Day military parade last year.

Muscular military displays of the kind that are common in authoritarian countries like China and North Korea are not quintessentially American, although military bands and honor guards customarily participate in holiday parades and warplanes sometimes are used in flyovers at big sporting events. The U.S. traditionally has not embraced showy exhibitions of raw military power as a claim of international prestige and influence.

Trump had wanted a military parade of tanks and other equipment in Washington after he watched a military parade on Bastille Day in Paris in 2017. His plan eventually was scuttled, partly because of cost, though he apparently held on to the idea. Local officials objected at that time, too.

A ticket-only area in front of the Lincoln Memorial is being set aside for VIPs, including members of Trump's family, friends and members of the military, the White House said.

The Republican National Committee is distributing a "small number" of tickets to the event, which it says is standard practice and follows what the Democratic National Committee did under Democratic presidents. However, those were smaller events at the White House, for example, and not major productions taking over the National Mall.

David Lapan, a retired Marine colonel and former senior spokesman at the Pentagon and the Department of Homeland Security, said enlisting troops for a Fourth of July event in the nation's capital only adds to their stress.

"After 18-plus years of war, we have asked a lot of our military and their families, and they have sacrificed," Lapan said. "Let's give them a day off rather than a day on for this holiday."

Some Democrats in Congress objected to what they saw as Trump's political motives.

"Most shameful of all is the fact that our military is being co-opted for a gratuitous display of strength by a commander in chief who relishes the attention of dictators and despots," she said.

The Pentagon said it had made no overall estimate of the cost of the military's participation. The Air Force said it costs $122,311 an hour to fly the B-2 bomber, which is to make the trip from its home at Whiteman Air Force Base in Missouri and back. Officials said this will be considered a training event, the cost of which is already budgeted. They said the per-hour flying cost of the F-22 fighter is $65,128.