More than two dozen current or former Ambien users from West Michigan reacted to a 13 Watchdog investigation that found a woman attempting to use a sleep driving defense to explain her erratic driving. 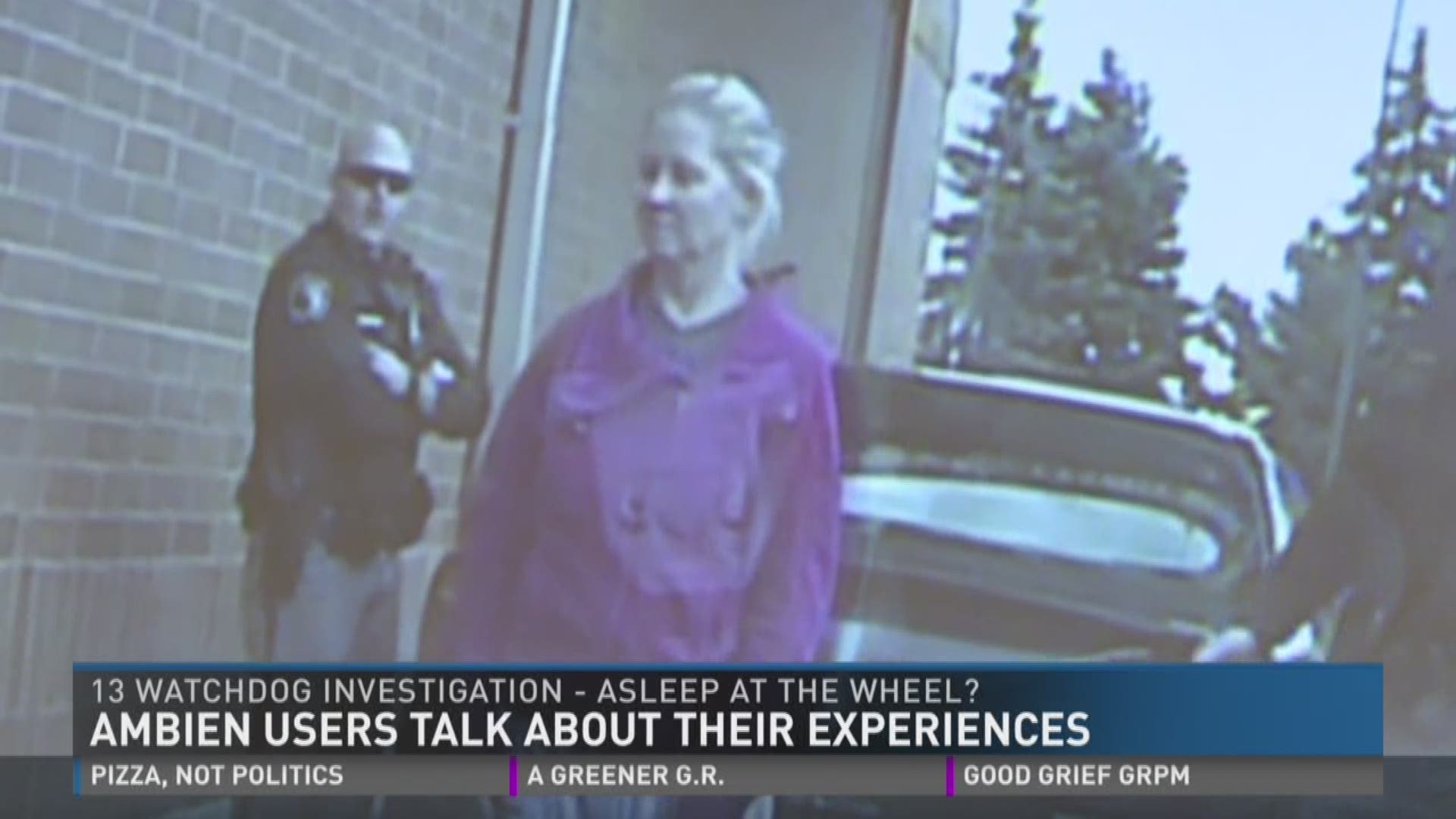 More than two dozen current or former Ambien users from West Michigan reacted to a 13 Watchdog investigation that found a woman attempting to use a sleep driving defense to explain her erratic driving.

Kathleen Bailey, from Rockford, got in her car at her home last November with her dog and drove southbound on Northland Drive. Witnesses say she blew a stop sign near Northland and Wolverine around noon on November 24, 2015 at a high rate of speed.

911 recordings revealed multiple witnesses describing the out of control situation.

"She just missed four people and she's driving all over the road here," witness David Burns told a dispatcher. "She is not to be driving because she is going to kill somebody."

Fortunately, there was no property damage and no injuries resulting from her poor driving.

Earlier this month, prosecutors decided not to drop the criminal charge against her and the case went to trial. Bailey was convicted of operating under the influence by a Kent County jury consisting of three men and three women.

She faces a sentencing despite using a unique legal defense. She told the jury she was "sleep driving" and used the prescription sleep aid Ambien to try to fall asleep the morning of the incident. She had been ill with the stomach flu for days and said she was trying to catch up on sleep she missed the night before.

She contends she was following her doctor's orders in taking the correct amount of Ambien before "bedtime".

"I didn't do anything illegal," Bailey said. "I had been so sick and I hadn't had a shower in two days."

She says she intended to sleep for an eight hour period as the medicine requires.

"She had no intent to drive a car," Bailey's attorney Ed Sternisha said.

In our look at Ambien, it's clear it helps an awful lot of people sleep. But, it's also apparent it can do some really weird things to people.

"I walked around, got in cupboards eating and drinking with no memory of it," Jeanne Molenkamp told us on Facebook.

Sarah Pawson reacted on social media: "It happened to my sister. Drove to work in her pajamas and ditched her truck with no knowledge of what happened and it wasn't time for work. Worst voicemail I have ever received."

A woman who asked not to be identified told us she unknowingly attempted to commit suicide after using the medication.

Ambien has been on the market since its approval in the U.S. in 1992. The company that makes the drug, Sanofi-Aventis says Ambien has provided 20 years of usage for people and "24 billion nights of patient therapy worldwide".

But Sternisha made a statement why it shouldn't exist.

"It puts everybody at risk and we don't know how they're going to react," Sternisha said. "We're punishing the patient and not the people who are putting this drug out there."

In Bailey's case, Sternisha prepared to use a sleep driving defense similar to one used by Robert F. Kennedy's daughter Kerry Kennedy in Westchester County, New York in 2014.

In that trial, Kennedy was found not guilty for driving under the influence of Ambien in a hit and run incident.

The psychiatrist hired by Sternisha to testify he thought Bailey was sleep driving, sat down with us to do an interview on his thoughts of the drug. Dr. Daniel Mayman told us he prescribes it to his patients.

"I think in the right situation it's a great medication," Dr. Mayman said. "It has a use and is very helpful for some patients."

Dr. Mayman told us he doesn't think the medication is effective beyond a few weeks of use but concluded the benefits outweigh the risks in some cases.

"I would not say take it off the market because there are many other similar medications that kind of have the same effects," Dr. Mayman said. "It's a matter of people being informed before taking medication and knowingly taking a risk."

The U.S. Food and Drug Administration put out warnings about the medication. It recommended in 2014 "the bedtime dose be lowered because new data show that blood levels in some patients may be high enough the morning after use to impair activities that require alertness, including driving."

The government is aware of issues of people reporting they have done odd things with the sleep aid in their system.

The drug maker Sanofi-Aventis released a statement to us regarding Bailey's case:

"Sanofi is committed to patient health and safety and treats Ambien reports with the highest degree of importance. Sanofi stands behind the robust clinical data that have demonstrated the safety and efficacy of Ambien."

Every expert we've talked with has told us people need to read the warnings on the medication, limit other medications used with Ambien and people need to make sure they can sleep for at least eight hours so the drug leaves a person's system before waking up.

Bailey will be sentenced in early December.