A woman from Rockford who tried to use a sleep driving defense to excuse her reckless driving is not going to jail after being convicted by a Kent County jury. 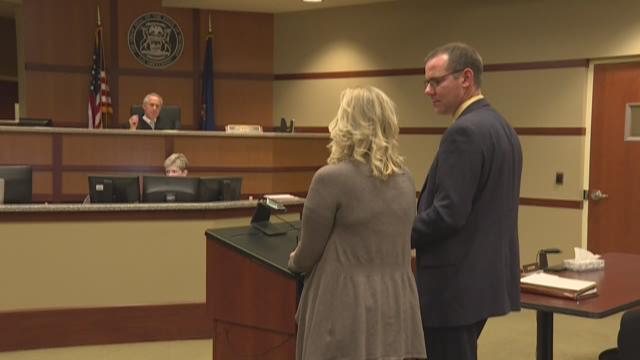 A woman from Rockford who tried to use a sleep driving defense to excuse her reckless driving is not going to jail after being convicted by a Kent County jury.

Kathleen Bailey was found guilty last month for operating under the influence of the prescription sleep aid Ambien. She nearly caused several wrecks along Northland Drive on Nov. 24, 2015.

Bailey was sentenced Friday, Dec. 2, by 63rd District Court Judge Jeffrey O'Hara to pay fines and costs but her jail sentence was suspended pending fulfillment of her other obligations.

The 13 Watchdog team took a close look at the case.

Bailey's a nurse and a single mother of a special needs son. She had no criminal record and no current driving record. Her reckless driving didn't cause any injuries or major damage. She had no alcohol in her system.

She contends she was following her doctor's orders in taking the correct amount of Ambien before "bedtime."

"I didn't do anything illegal," Bailey said. "I had been so sick and I hadn't had a shower in two days."

She says she intended to sleep for eight full hours as the medicine requires.

"I then took an Ambien to get some sleep and the next thing I know I am being fingerprinted," Bailey said.

Bailey says she doesn't remember driving at all.

"I literally do not know what happened," she said.

Bailey says she had taken the medication for the past ten years with few issues. She began taking it to help her sleep after suffering from treatments for breast cancer.

"Why would I have to fight for my freedom if I took a medication prescribed by my doctor," Bailey said. "This is a medical thing, this is not a criminal thing."

An expert witness, Dr. Daniel Mayman, was hired by Bailey as an expert and testified that he believed Bailey was sleep-driving even though her eyes were open and she was talking to the deputies.

"The problem is the higher functions of the brain where our judgement comes from are not working well, they're only working a little bit," Dr. Mayman said.

The Kent County prosecutor's office decided to try her on the criminal charge.

A Kent County jury agreed with Grimes last month and convicted her of operating while under the influence. Judge O'Hara said today Bailey was wrong for taking two Ambien pills within 12 hours.

Bailey maintained her innocence in court.

"This was nothing that I intentionally wanted to do and I honestly had no control over what was happening," Bailey said.

After the sentencing, Bailey's attorney Ed Sternisha had a strong warning for people currently on Ambien.

"When someone's prescribed a medication and takes it as prescribed, is it justice that they are convicted of something that happens because of it?" Sternisha said.

(EDITOR'S NOTE: Reporter David Bailey is not related to the defendant in this case, Kathleen Bailey.)