Stephanie Scott started playing golf this summer. On her first shot of the first competitive round, she accomplished something most golfers never do in a lifetime. 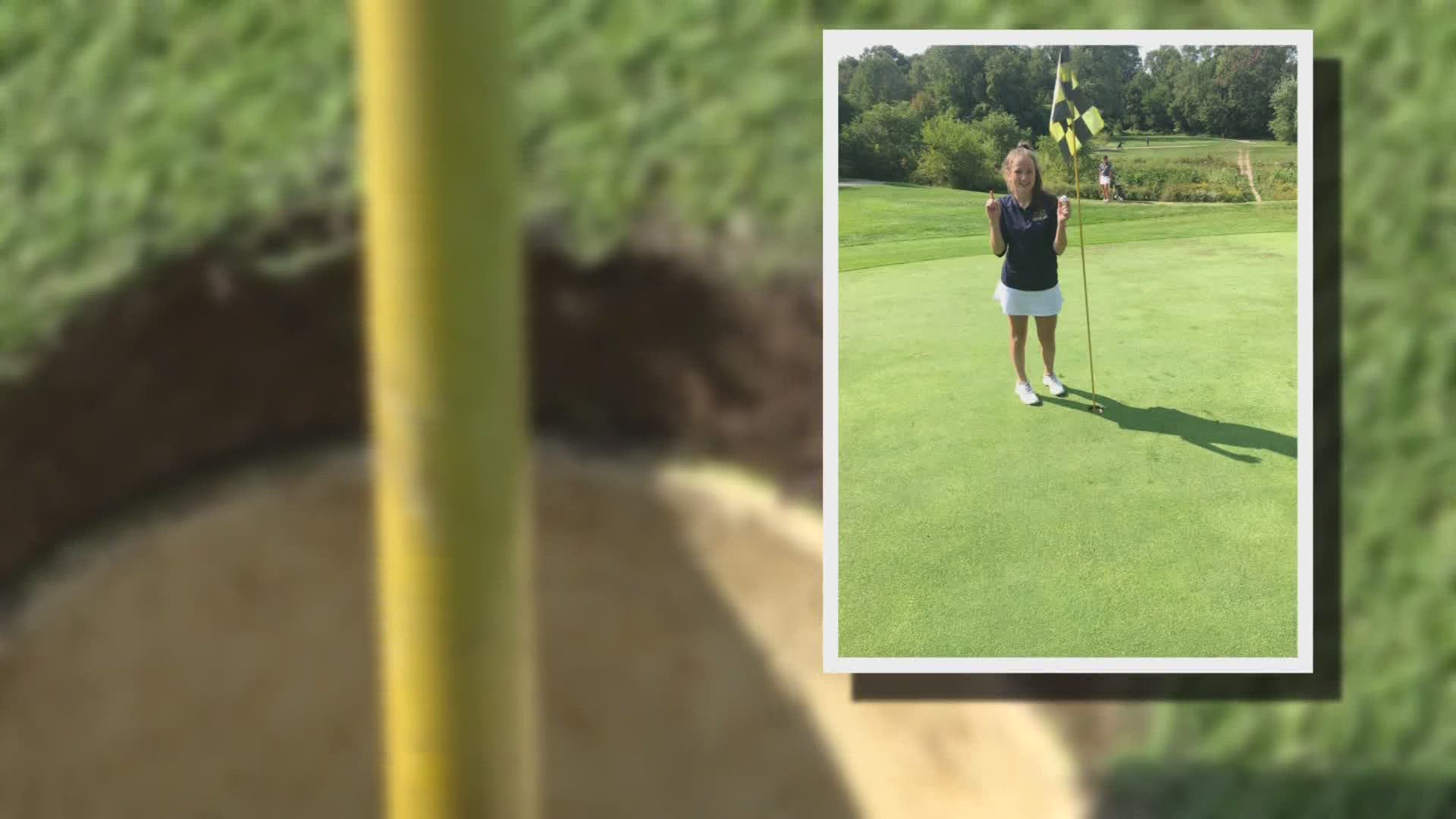 OTSEGO, Mich. — Quick question to both Tiger Woods and Jack Nicklaus - can either of you claim to have hit a hole-in-one on the very first shot of the very first competitive round of golf you ever played?

I didn't think so.

A freshman golfer at Otsego High School managed to pull off the unprecedented feat on Monday - just a couple months after she started learning the game.

"I was already late for my match, so I had to race out to the 8th hole," said Stephanie Scott, 14, who is a freshman at Otsego High School. "I didn't even get to have very many warm-up swings."

Good thing she didn't get many warm-up swings because she might have wasted the swing that has put her in rare air in the golf world.

The setting was Lake Doster Golf Club in Plainwell, Mi. Stephanie was called into varsity action as part of a full-team dual meet against rival Plainwell.

She pulled a 7-iron out of her bag and began sizing-up the par 3, 90 yard hole. She stood over the ball, put forth a textbook backswing and follow-through, and when her club head struck the ball, her golf career began.

What happened seconds later would make a career for most golfers.

"I didn't feel like it was a good shot, but it was, I guess," said Stephanie. "Some parents were sitting by the green and I heard one of them scream, 'Holy cow, it went in.'"

Stephanie's first shot of her first competitive round of golf one-hopped, pinged off the pin, and went in for a hole-in-one.

"I was in shock," Stephanie said. "It felt so amazing."

Matt Rayman is both the golf pro at Lake Doster Golf Club and the golf coach at Otsego High School. He says in over three decades around the game, he'd never seen anything like what Stephanie did.

"For her to do what she did on the first hole and on the first swing of her career has to be one in millions," said Rayman. "I ran around like a crazy man and was way more excited than she was.

Credit: Matt Rayman
On the first shot of her first competitive round of golf of her high school career, freshman Stephanie Scott got a hole-in-one.

Credit: Matt Rayman
On the first shot of her first competitive round of golf of her high school career, freshman Stephanie Scott got a hole-in-one.

"We walked up to the hole and I watched her take the ball out. I then showed her how to fix her ball mark because she hasn't hit too many greens.

Stephanie says she dabbled around with golf when she was 7 years old, but didn't really take interest in the sport until this summer. She says she had to make a choice between fall sports and ultimately decided on golf over swimming.

Credit: WZZM
Otsego freshman Stephanie Scott recorded a hole-in-one before ever getting a par or a birdie.

What makes Stephanie's accomplishment even more stunning is that she got a hole-in-one before ever recording a par or birdie.

"I don't know if i will ever top this," said Stephanie.