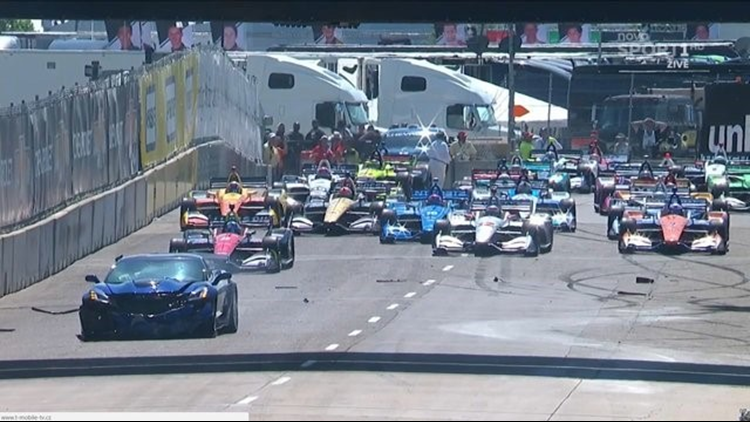 DETROIT - If I’d been driving the pace car Sunday around the IndyCar track at Belle Isle, I probably would’ve put it into the wall earlier and harder than Mark Reuss. You, too.

Driving a 755-horsepower Chevy Corvette ZR1 leading a pack of race cars around the tight, bumpy road course in Detroit’s signature park is far harder than it looks.

Writing about the auto industry, I’ve driven fast cars around famous race tracks all over the world. The Indianapolis Motor Speedway, ice rally courses north of the Arctic Circle, Formula 1 courses in Europe.

And the Indy road course that snakes around Belle Isle in the middle of the Detroit River. Its tight curves and bumpy surface regularly send the world’s best drivers spinning.

The potential to embarrass yourself is endless. I’ve declined every invitation to Belle Isle pro-am races, and even passed on a recent offer to compete in a race simulator.

The Corvette ZR1 GM product development boss Mark Reuss was driving when he spun out in Belle Isle’s infamous Turn 2 was probably generating more power than most of the IndyCars running behind it in their prerace settings. The pace lap around a road course is no ceremonial, homecoming-parade-speed saunter around the island. The pace driver has to help the cars behind him get up to racing speed and warm their brakes to operating temperature.

The odds are Reuss hit a mid-curve bump at just the wrong angle, launching the ‘Vette hard into the wall.

“It's very easy to do as you go over that crest, and the traction control must have been turned off,” Indy 500-winning driver Will Power said Sunday. “So yeah, I felt — wasn't really his fault. It's just such a bad corner. Like it's very easy to do … You know, that's racing, right? I've seen plenty of pace car crashes. Like I've seen plenty of people coming off in the wet and crash, and not abnormal.”

Reuss has mad skills. He’s one of just 30 engineers in all of GM who are certified to drive development vehicles on the diabolical Nurburgring Nordschliefe, Germany’s legendary 13-mile, 73-turn road course. He’s also licensed to drive FIA C and IMSA Road Racing cars.

He’s not a suit who ran out of road and skill showing off. Reuss led GM’s performance division for years. Now he oversees the development of some of the world’s fastest street cars, and he does it from the driver’s seat.

Not many of us would have wanted to be in his seat Sunday.