The Walker family from Fremont, Mich. has a standing U.S. Military Congressional record very few know about. All 10 Walker brothers enlisted in the Armed Forces. 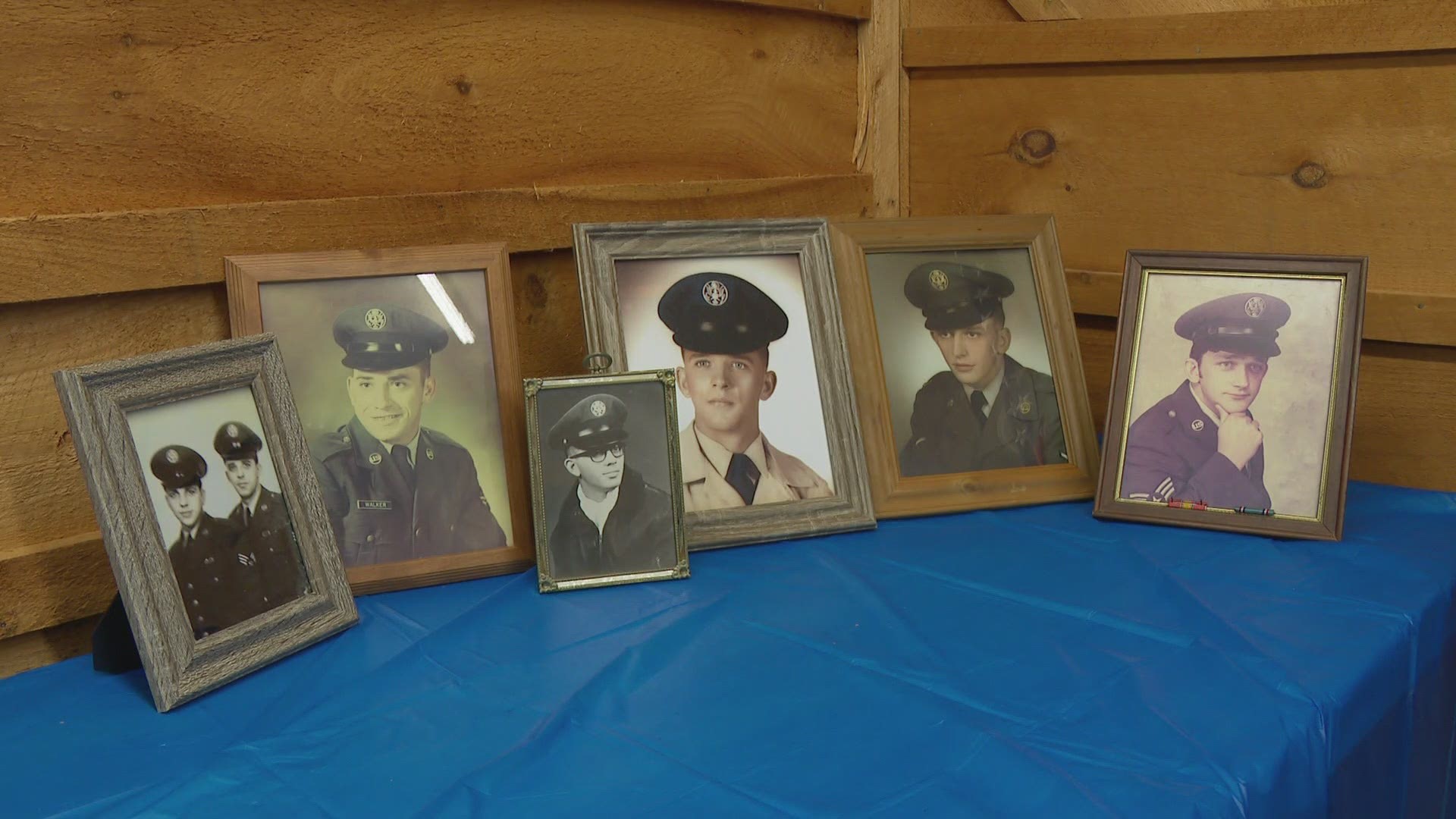 FREMONT, Mich. — It's been said that records are meant to be broken.

A family from Fremont, Mich., steeped in patriotism and service to their country, would beg to differ.

The Walker family has been holding onto a standing United States Congressional record for having 10 siblings (all brothers) enlist and serve in the U.S. Armed Forces.

While their parents were recognized for this achievement, the brothers never were, leaving a gaping hole in the family that was finally filled after more than 50 years.

Credit: Fremont Times Indicator
The Walker family from Fremont, MI. holds a standing U.S. Congressional record as the only American family to have 10 brothers enlist in the Armed Forces.

James and Pearl Walker were the proud parents of 12 children, which included two daughters and 10 sons. They made it their mission to raise their children to honor and respect their country, which ultimately led to the brothers doing something no American set of siblings, neither before or since, has done.

"Each brother before him made the next one's journey a little bit easier," said Doug Rice, who is the brothers' nephew. "This is one of the most historic military families ever to serve that nobody knows about."

Doug says he's heard the tales about his 10 uncles' military service his whole life, but every time he thinks about it, he says he has feelings of both appreciation and frustration.

"The boys never got any recognition back then," Doug said. "Here we are, more than 50 years since they all went into the service, and they still haven't been recognized."

Doug decided in early 2021, with only six of the 10 Walker brothers remaining, that some sort of recognition needed to be done for them.

The unprecedented military run of Walker brothers began in 1954 when the oldest of the brothers, Frank Walker, enlisted in the U.S. Marines.

"I had no idea what I was starting at the time," said Frank, 86, who now resides in California. "I got out [of the Marines] in 1958, but I was certainly proud to watch all nine of my younger brothers follow in my footsteps."

Frank was the only brother to enlist in the Marines. The remaining brothers all chose the U.S. Air Force.

"I didn't have any special reason why [I enlisted]," said Robert Walker, 85, who was the second brother to enlist. "I just remember thinking it was a good thing to do."

"I was very proud of all my brothers for their choice to serve their country," Robert said. "I still am."

"I was a middle brother so I didn't count," David, 79, joked. "I don't recall any of us [brothers] talking about it when we were home, but I know it impressed our parents."

In 1970, word of the Walker family's 10 sons, either serving or having served, made it all the way to Washington D.C. The entire family was invited to be the honored guests at the National VFW Washington Conference, which included a visit to the White House to have a private meet-and-greet in the Oval Office with then President Richard Nixon.

Credit: 13 ON YOUR SIDE
In March 1970, James and Pearl Walker (parents of the 10 brothers) were invited to Washington DC, where they met with President Nixon while there.

In March of '70, when the VFW Conference was unfolding, Richard Walker was in a Vietnam hospital and could not make it back home to go with the family to Washington.

"I remember mom and dad saying, 'If they all can't be here, then none of them can go.'"

James and Pearl decided to make the trip and serve as the proxy for their 10 sons.

"It was an honor," said David Walker, 79, who served in the Air Force in the Civil Engineer Squad from 1960-1968. "It was so great that our parents got to go and experience that."

"I still tell the story of their Washington D.C. trip often," quipped Dennis Walker, 70, who was an Air Force aircraft mechanic from 1969-1977. "We find out that our family had a standing Congressional record as the only American family ever to have 10 siblings enlist in the Armed Forces."

After James' and Pearl's D.C. visit, no more recognition was made about the family's contribution to their country, in particular with the 10 brothers.

The years would morph into decades, as the brothers each quietly re-entered civilian life and never mentioned it or felt bitter about never having received attention.

"I think most people don't need kudos for something they feel obligated to do," added David Walker.

Richard Walker, the second youngest of the brothers, was the last of them to leave active duty, which he did in 1992.

For 29 years, no proper recognition was bestowed upon the brothers, despite them still holding the Congressional record. During that span, the only place in Fremont that anyone could find recognition for the Walker brothers was by finding all of their names engraved on the Military Wall of Honor that stands in a downtown park off Main Street.

Credit: 13 ON YOUR SIDE
If you visit the Military Wall of Honor in downtown Fremont, MI., you can find the engraved names of all the Walker brothers.

"I truly believe one of the main reasons why they never got any recognition was because of the Vietnam War happening during that time," Doug said. "Many believe that was a war the United States didn't belong in, and the country soured on our military.

"I remember my uncles telling us when they returned from active duty, they had to rush into an airport restroom to quickly change into civilian clothes so passersby wouldn't ridicule them for their service."

During the 49 years since, four of the Walker brothers passed away (Gerald, Norman, Charles and Mark). The six surviving brothers are all in their 70s and 80s.

"I decided if some recognition was ever going to happen, it needed to happen this year," said Doug. "This is something that has stuck with me long enough."

In February 2021, Doug contacted the Fremont VFW hoping to arrange some sort of recognition celebration for his uncles. Doug booked the VFW for an event on Tuesday, March 30.

"I reached out to my uncles and all of them except Frank in California said they'd come and be here on that day," Doug said. "We would still include Uncle Frank in the recognition, via Zoom."

When the day arrived, the Walker brothers, several close friends and family members poured into the facility. Also on hand were several dignitaries, including U.S. Representative Bill Huizenga.

"When you look at the 1960s, there was a lot of questioning about government just like there is today," said Huizenga, R-Zeeland. "I can see where the [Department of Defense] and the White House would be very interested in having this family come visit, because they're the counter-narrative to what's happening now.

"[Back then], there was a permanent encampment in Washington D.C. on the mall as a protest against the Vietnam War, and yet you've got a family with 10 brothers who are all serving their country."

Credit: 13 ON YOUR SIDE
During the March 30 recognition event, each of the Walker brothers received a certificate, honoring them for their service. A plaque was also made.

Credit: 13 ON YOUR SIDE
During the March 30 recognition event, each of the Walker brothers received a certificate, honoring them for their service. A plaque was also made.

The brothers were asked to come up on stage where they were each given a special plaque. When the ceremony concluded, Dennis Walker was asked to hang a picture on the wall of a Fremont newspaper article, featuring the Walker family.

Credit: 13 ON YOUR SIDE
As the Walker recognition celebration drew to a close, Dennis Walker was asked to hang this picture on the Fremont VFW wall, honoring the family.

"I was very proud to be a part of this family," Dennis, 70, said. "Being the youngest, I looked up to all of my brothers my whole life."

Recognition is something that's very relative, meaning its value is different for everybody. While the Walker brothers were grateful that Doug pulled together the event to finally honor them, through their humility, none of them thought it was necessary.

Since Richard Walker was the brother whose injury prevented all of them from joining their parents on the Washington D.C. trip, it's only fitting that he be the one who re-defines "recognition" the only way they know - the "Walker Way."

"There's a responsibility that each one of us as American citizens has and that's to take care of this country," Richard said. "I'm not just talking about the Walkers; I'm referring to all of us.

"I don't care whether it's in the military or as a street sweeper, do the best you can for this country."

Credit: Doug Rice
Charles Walker (U.S. Air Force); Saw duty in Okinawa and Vietnam. He was twice decorated for service beyond the call of duty in Vietnam. 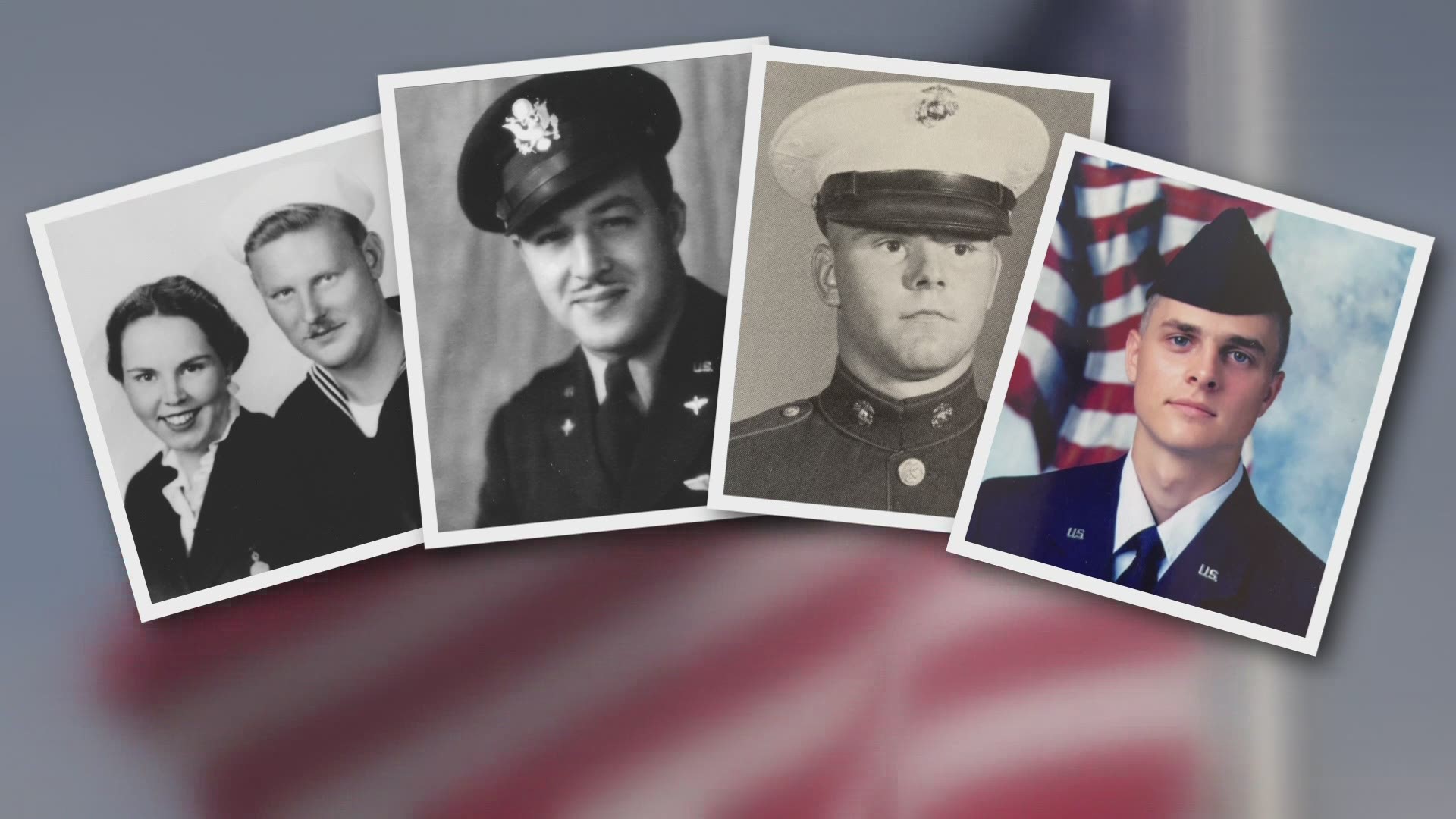