Throngs of mostly maskless fans took to the streets and packed sports bars across Tampa as the Tampa Bay Buccaneers won the hometown championship. 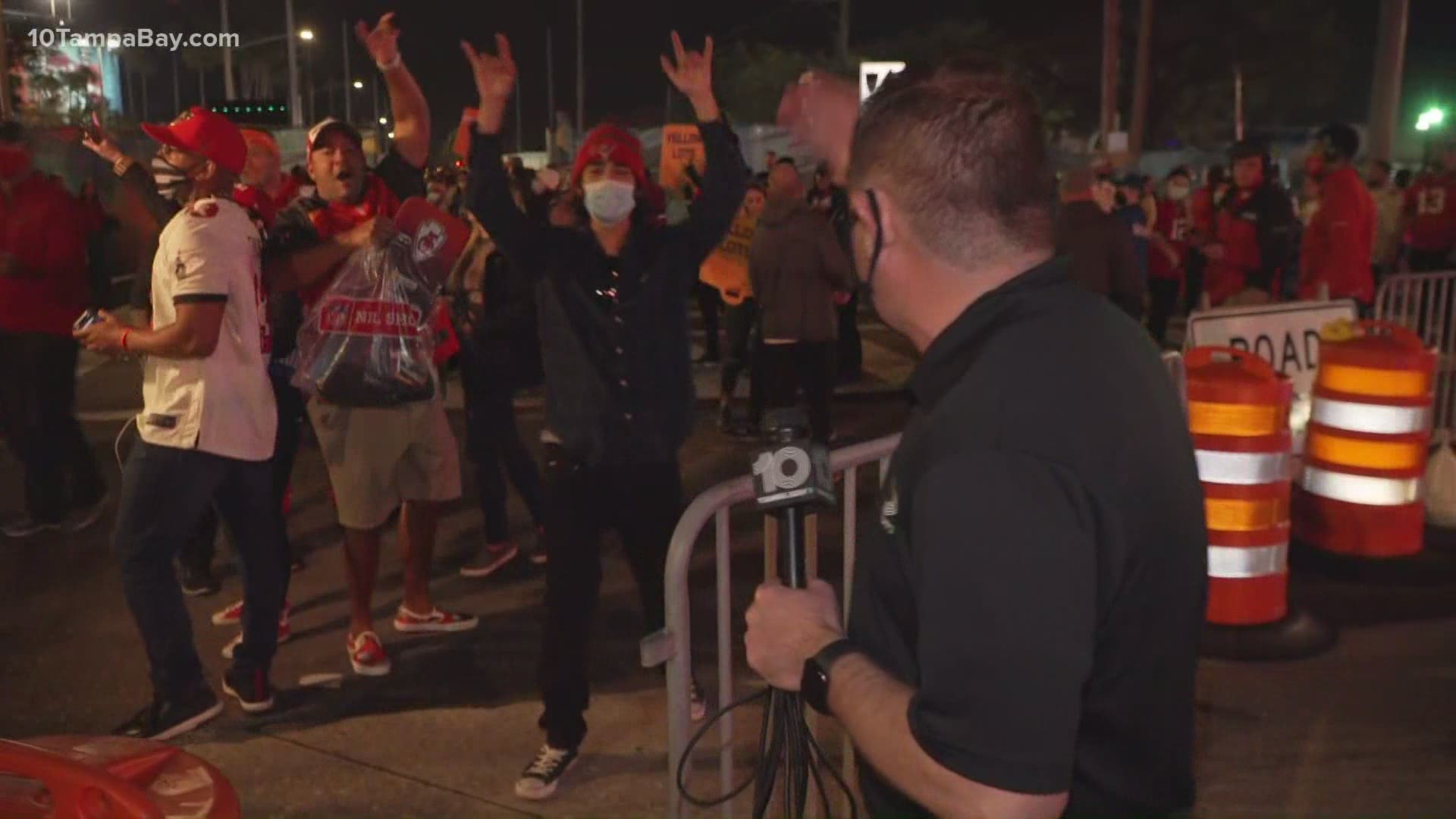 TAMPA, Fla. — So much for the mayor's order requiring masks at Super Bowl parties. Videos went viral on social media, showing throngs of mostly maskless fans and packed sports bars as the clock inside Raymond James Stadium ticked down on a hometown Super Bowl win for the Tampa Bay Buccaneers.

“It is a little frustrating because we have worked so hard,” Tampa Mayor Jane Castor said during an early Monday morning news conference with the Super Bowl Host Committee. “At this point in dealing with COVID-19, there is a level of frustration when you see that.”

Some 200,000 masks were handed out ahead of the game, and “a majority” of people and businesses followed the rules, she said.

Hours later, during another news conference, Castor's remarks shifted, saying that the people she saw celebrating were mostly masked.

“I’m proud to say the majority of individuals that I saw out and about enjoying the festivities associated with the Super Bowl were complying,” she said. “They understood their level of personal responsibility and they were doing the right thing. I’m very proud of that.”

Even the White House weighed in.

“He is of course concerned when there are pictures and photos - we all are - that show many, many people without masks in close distance with one another at the height of a pandemic," she said.

To meet coronavirus protocols, the NFL capped the crowd at under 25,000 in a stadium that normally holds some 66,000 fans, and required masks.

But outside the stadium, crowds of fans who weren't wearing masks or practicing social distancing could be seen celebrating the Buccaneers' 31-9 win over the Kansas City Chiefs on Sunday night. Folks cheered, crammed into bars and hugged in several hotspots around the city — and swarmed the streets — all without masks.

In hopes of curbing so-called super-spreader events, Castor had signed a largely voluntary executive order requiring people wear face coverings during the Super Bowl festivities, even while they’re outdoors. She pleaded with people to celebrate safely, noting the city could issue fines of up to $500.

It wasn't clear on Monday how many citations the city handed out, if any.

The mayor cited the fall Stanley Cup win by the Tampa Bay Lightning hockey team — and the fan celebrations surrounding that — as evidence that it's possible for folks to party outdoors without spreading the virus.

“We didn’t see those spikes after the Stanley Cup events,” she said.

A look at COVID-19 cases on Sept. 29 and Oct. 1 — days when certain fan events happened after the hockey team's win — and at cases two weeks later show a tiny uptick, according to data from Johns Hopkins and the Covid Tracking Project.

Local orders were overridden last year by Florida Gov. Ron DeSantis, whose executive order made it difficult for local governments to enforce mask policies because it prohibits them from fining people who don't comply. Florida has never had a mask policy.

Across Tampa Bay in St. Petersburg, Mayor Rick Kriseman was already unhappy about a maskless party hosted by Rapper Curtis “50 Cent" Jackson in a hangar at Albert Whitted Airport on Friday night. Pictures from the party posted on social media showed a densely packed event with few people wearing masks to protect against spread of the coronavirus.

“This isn’t how we should be celebrating the Super Bowl,” the mayor tweeted on Saturday. “It’s not safe or smart. It’s stupid. We’re going to take a very close look at this, and it may end up costing someone a lot more than 50 cent.”

This isn't how we should be celebrating the Super Bowl. It's not safe or smart. It's stupid. We're going to take a very close look at this, and it may end up costing someone a lot more than 50 cent. @TMZhttps://t.co/Vrvg8fTdBB

The nation’s top infectious disease expert, Dr. Anthony Fauci, also warned against turning the Super Bowl into a super spreader, saying before the game that people should “just lay low and cool it.”

Florida has recorded 1.7 million confirmed cases of the coronavirus and more than 28,000 deaths, according to state health records. State officials said Sunday that 667,830 people in Florida had been fully vaccinated against COVID-19.

Castor said the city and Buccaneers are planning an official celebration to be held later this week.

RELATED: No Budweiser Super Bowl ad this year, but people keep looking for it