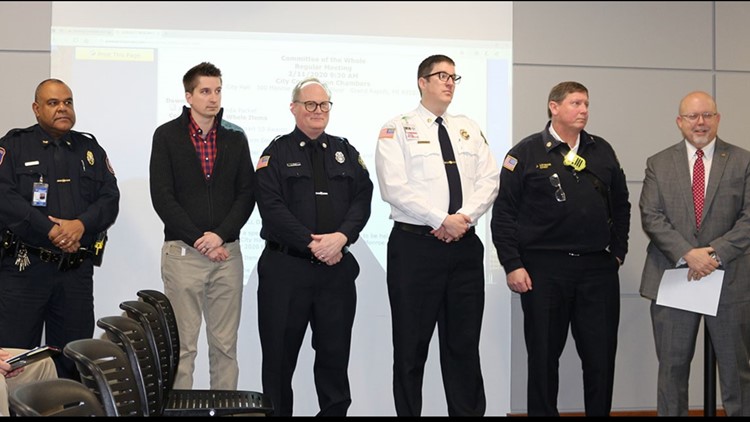 Photo by: City of Grand Rapids
City leaders recognize the creators of two innovation projects that will be honored at Smart 50 Awards.

GRAND RAPIDS, Mich. — The City of Grand Rapids will be recognized for two of its innovations at a conference that recognizes "smart cities" worldwide.

The Smart 50 Awards will honor Grand Rapids for the GR PayIt service and the Emergency Vehicle Digital Alerting with HAAS Alert at a conference in April.

However, the teams behind the smart mobility and digital transformation projects were honored by the Grand Rapids Manager and the City Commission Tuesday morning for their award-winning work.

“GR PayIt has transformed how residents interact with their government and has drastically improved our service to the community,” said City Treasurer John Globensky. “This program makes it easier for residents to pay their bills, decreasing mailed checks and trips to City Hall.”

Grand Rapids is focusing on using technology systems to provide excellent, equitable and innovative solutions to the community, a press release from the city explained.

Another technological transformation project created by city employees will be honored at the awards in Denver and was applauded by Grand Rapids leaders at the ceremony on Tuesday.

The Emergency Vehicle Digital Alerting with HAAS Alert system alerts drivers via navigation apps such as Waze when emergency vehicles have to speed down the roads.

“This type of technology can help save the lives of drivers and emergency personnel responding to incidents by alerting traffic of emergency vehicles stopped in or traveling on the roadway," said Dave Schnurstein.

Throughout the past year, nearly 200,000 Grand Rapids drivers received alerts about nearby emergency vehicles, according to a press release from the city. Among these hundreds of thousands of drivers are people who are deaf or hard of hearing.

“They have to be especially careful at intersections and use other senses no matter how loud sirens get or how bright they make lights. These alerts add an important layer of safety for them," said Grand Rapids Assistant Fire Chief Brad Brown.

Grand Rapids has been recognized for its innovations in previous years. The City also received the City Government Experience Award for the GR PayIt service, was named the Nation's Top Data-Driven City and was honored with the Utility of the Future Today award.