Members of the community were able to ask city leaders questions about the police response to the Proud Boys rally. 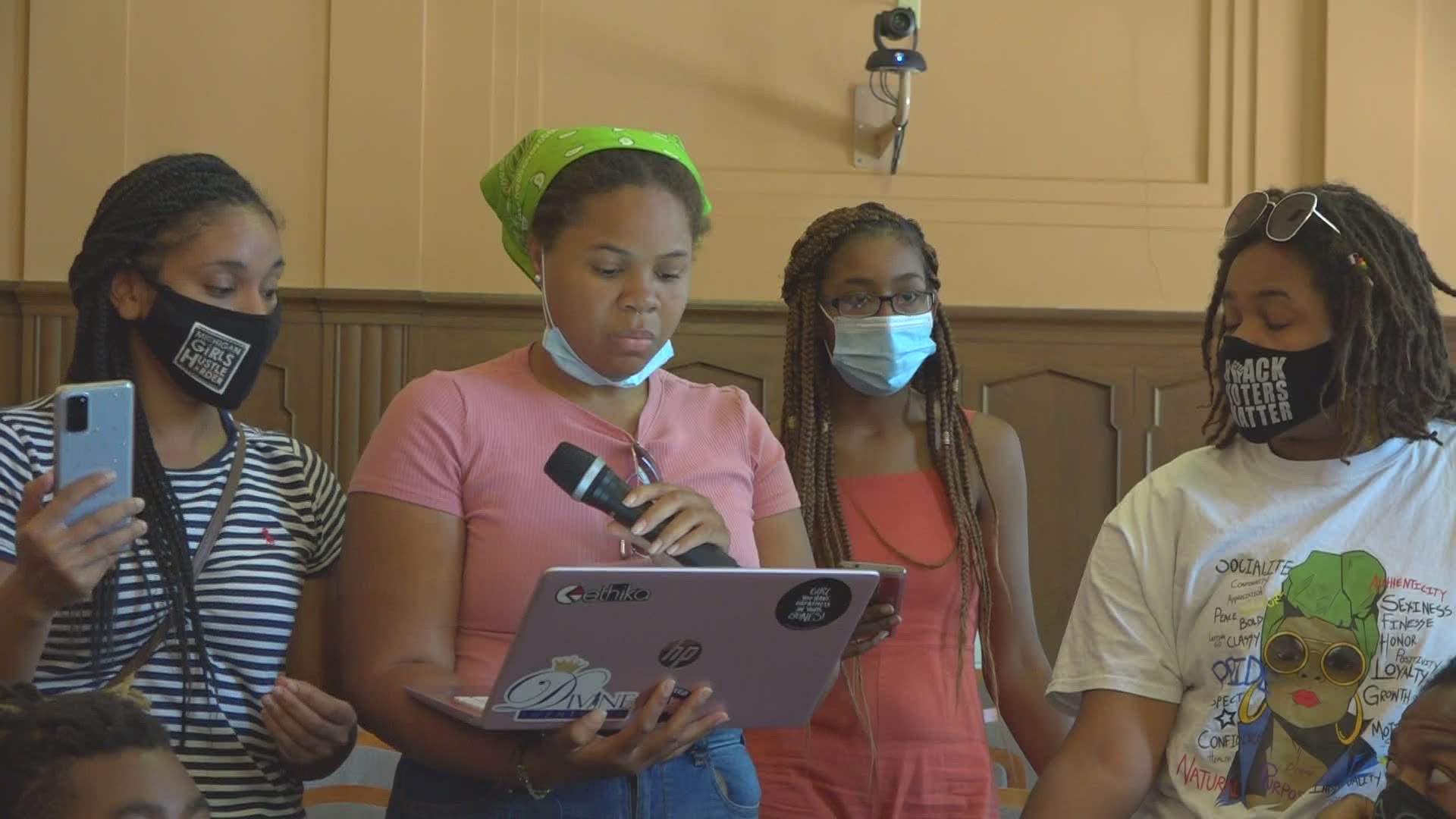 KALAMAZOO, Mich. — Kalamazoo city leaders held a press conference Sunday to explain the law enforcement response to violence that broke out between the Proud Boys and counter-protesters.

The Proud Boys, labeled a hate group by the Southern Poverty Law Center, held a demonstration Saturday afternoon and clashed with counter-protesters. However, some members of the public criticized the Kalamazoo Department of Public Safety for their delayed response in restoring peace to the city.

Kalamazoo Public Safety Chief Karianne Thomas said police first learned about the potential Proud Boys rally in July and as the Aug. 15 date approached, it "seemed more likely" that the event was going to occur.

Counter-protests were also planned, one of them by Nathan Dannison, a pastor at a local church. Dannison said it took police 20 minutes to respond after fighting broke out.

Thomas said the department developed their tactics to keep a low profile after protests against police brutality earlier in the summer.

"We continue to learn from these events in responding to large-scale gatherings and protests, and we learned in early June from feedback and review that large-scale police presence of officers often created a contentious situation," said Thomas.

She said they planned to have a presence but be less visible to avoid becoming a "target" of demonstrators, which has been an operational plan for other protests since June.

Over 100 officers were deployed to "restore order from the chaos created by this event," said Thomas. Police made announcements asking people to clear the area, creating a police zone.

Police arrested nine people during the clashes between the Proud Boys and counter-protesters on charges ranging from violating the police zone, resisting and obstructing, impeding traffic, felonious assault and malicious destruction of property.

Kalamazoo Mayor David Anderson said he was calling for the charges to be dropped against the five people who were charged with violating city ordinances. The other four are facing more serious charges by the county.

An MLive Media Group reporter was also arrested while covering the incident; he was live streaming the events when detained. Thomas apologized for her officers taking Samuel Robinson, 23, into custody. Robinson was charged with impeding traffic and held at the county jail for over an hour.

"The reporter was wearing visible credentials, and should not have been arrested," said Thomas.

RELATED: Protesters line up in front of police department after violence at Proud Boys rally

At the press conference, members of Kalamazoo activist groups and the community asked questions and prompted a dialogue with city leaders. One of their criticisms was that the police response to the Proud Boys event differed from the visible presence of officers at racial justice protests that occurred earlier in the summer.

The community members came with a list of questions and demands for police, including asking for a reallocation of police resources toward community investments.

Thomas said police respond to the "actions that occur and not to the ideology." She said that their operational plans were three times larger for the response to this event than to any of the Black Lives Matter protests that occurred earlier this summer.

City leaders answered questions from activists and community leaders for about 45 minutes. Anderson said they might not reach any solutions Sunday, but he wanted to kick off discussions.

The mayor also emphasized the city has "zero support" for the tactics of the Proud Boys. Thomas said within 90 minutes of the group showing up in Kalamazoo, they had cleared out. "(They) completed their mission by creating a divisive situation for the community, then leaving," she said.

Thomas said law enforcement's priority was getting the Proud Boys out of the city; she said she didn't believe any members of the group were arrested.

After the group cleared out, counter-protesters continued to demonstrate shifting their focus to the police response. Protesters rallied outside the Kalamazoo Department of Public Safety late into the night.