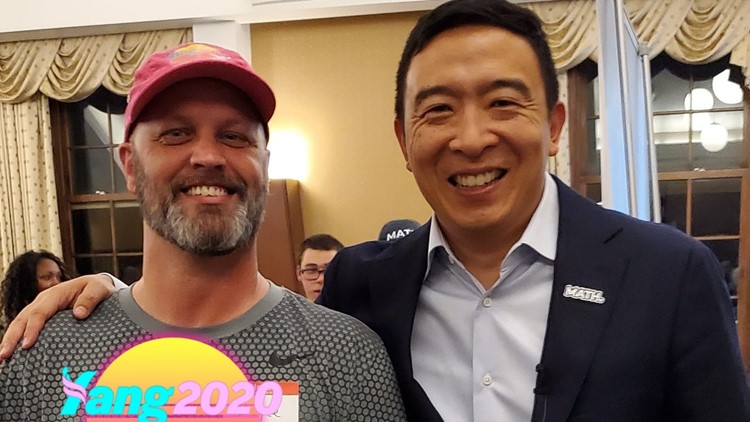 BENTON HARBOR, Mich. — Boyce Littlefield from the Benton Harbor area is a YouTuber, a physical therapist and a proud member of the Yang Gang, a group of ardent supporters for Andrew Yang.

However now that the Democratic candidate for president dropped out of the race Tuesday after falling short in the New Hampshire primary, the Yang Gang is left wondering what's next.

The announcement was disappointing to many who supported Yang. The 45-year-old has had relied on grassroots support from the Yang Gang during his campaign. His supporters are known for being internet saavy and they helped bolster the profile of the relatively unknown candidate during his campaign that outlived other high profile candidates.

Yang has fostered the support of his fans, saying their "meme game is strong."

Littlefield, who runs the runs the West Michigan Facebook group in support of Yang, said he never felt the need to be involved in a campaign before.

"I have been an uninformed voter in the past," he said.

But Littlefield was drawn to Yang because of the former candidate's positions on the economy and technology. One of the key components of Yang's campaign was discussing the future of automation and manufacturing.

"I liked the fact that he is capable of handling the tech changes we will go through," Littlefield said. "And he (Yang) thought of solutions to employment problems for jobs being phased out."

Yang is an entrepreneur who didn't bring political experience to the table. However, his antics on the campaign trail and his lightheartedness endeared him to the Yang Gang.

For the past year Littlefield has worked to support Yang and often crossed the state line going to Indiana to drum up support anyway he could before their primary in May. Littlefield also hosts a podcast on YouTube and has dedicated the channel to the past year to Yang and the campaign.

"I was actually streaming live on my channel when the news broke and I was very surprised by it," Littlefield said.

RELATED: Who is running for president in 2020?

Now that Yang is out of the race, that leaves the Yang Gang needing to find a new focus. But Littlefield said he is not shying away from politics and still plans to be very much involved.

"I am going to focus on more progressive candidates," he said "I hope to align with someone close to his (Yang's) policies and humanitarian issues."

MORE TRENDING STORIES FROM 13 ON YOUR SIDE: